Printer Grows By Over One Million…

Printer Grows By Over One Million…

When Peter Knight – MD of Printerbase first met his Business Coach, little did he know he would soon have a headline ‘Printer Grows By Over One Million’. “At the time I met my Business Coach my business lacked direction. It was fairly sound financially, but I really believed the profit didn’t reflect the amount of time I was putting in.” 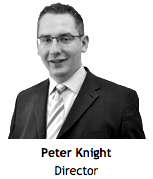 My Business Coach immediately identified that this was, to a large extent, because I was spending far too much time working in my business rather than on it, which meant I was getting bogged down in the minutiae and not providing strong leadership. It left my team without clear goals and with little motivation.

My Coach has helped me to systemise my business and impressed upon me the importance of ‘knowing my numbers’. I now have a ‘dashboard’ that allows me to see instantly how the business is doing and this is available to my team on large screens in the office.

It engages team members in the process and means they are more focused because they understand how their actions impact upon the business.

“My business is now the success I’d always hoped it would be, and I don’t just mean financially. Because of sustained growth, we are now supporting employment in one of the most deprived areas of the UK. It’s a good feeling.”

Amongst many positive changes, we have embraced new media opportunities with our own YouTube channel – which has given a boost to lead generation – we’ve developed our USPs, increased our conversion rate, improved our margin on consumables and raised our Average Pound Sale by 13%.

The result has been that the business has grown and we have had to take on more staff, something my Coach has helped us with through the implementation of the Business Coaching recruitment system.

Now that I have a larger team – a team that is motivated and loyal to the business – I have been able to delegate certain tasks and responsibilities, which means fewer hours for me.

I still work around 32 hours a week in my business, but that’s a significant improvement on the 58 hours I was previously putting in. I have more time to work on my business and, from a personal point of view, I’ve got more of a life outside the business.

It would be no exaggeration to say that the work I have done with my Business Coach has completely transformed my business. I now have a productive, happy and motivated team and a truly successful business.

The headline figures speak for themselves and I know my business would not have achieved them without the help of my Business Coach. But the figure that stands out most in my mind is the return on my investment in him – a remarkable 522.48%!

Need I say more…? ‘Printers grows by over one million’

What the Business Coach Has To Say…

When I first met Peter his business was financially sound but the potential of the business was simply not being realised and Peter was aware of this; he was just not clear why. In his mind, the effort he was putting in was not being reflected in his financial figures.

My first task was to help Peter realise that he was spending far too much time working in his business. He was so embroiled in day-to-day operations that he had neglected any real planning or strategising for the future. The business lacked systems, direction or any real leadership from him and his team had no motivation, no goals and no accountability.

It’s not always easy for a business owner to accept or acknowledge that things are not quite right and that left as they are they could have a negative impact upon the business. But Peter was quick to realise the truth of the situation and even quicker to implement significant changes.

I have helped him systemise his business and plan for the future. He and his team now have a clear roadmap for future growth and the team is motivated and committed. Everyone can see the positive impact change has had on the business…and everyone wants that to continue.

‘LibAbun’ is short for ‘Liberators Of Abundance’. We are all about helping people in Business (you) achieve greater levels of abundance in both your professional and personal life.

Copyright 2020 – Libabun Business Angels Limited | Registered in the UK | All Rights Reserved | all content displayed on these pages is protected by international copyright law. Any unauthorised publication, use or reproduction of any content including images, code, data, graphics, trademarks and software may be prosecuted.